The role pointing to the class whole is never navigable; in the Designer it is represented by a black rhombus, which graphically distinguishes a composition from an association. The only multiplicity allowed for this role is Exactly one (1); this is because each object of class part can only be part of one object within the application.

The other end of the composition, the one of the role of the part class, on the other hand, is always navigable and can have any multiplicity. In other words, a part object can be part of a single integer (whole), while an arbitrary number of parts can be defined for each integer.

An example of composition is shown in the figure: the Project_assignment class has been modeled as a part of the whole Employee class; this is because the assignment relative to a project is not an independent concept, but is always subordinate to that of employee. In other words, assignments only make sense to exist as objects as parts of specific instances of the Employee class.

Alternatively, click on the Palette Create a new composition, then click first on the whole class and then on the part class.

The moment a composition is created, the class that becomes a part loses its class role, and with it the ability to be managed independently in the generated application:

Since the management of the part is subordinate to that of the whole objects, the generated application does not allow to manage in aggregate form all the objects of a part class. However, in some cases it may still be useful to display all part objects in read-only mode; the Application schema allows to enable a menu item dedicated to this purpose.

Convert an association into a composition #

A composition can always be converted to an association via the Convert to association option of its Composition menu. The role cardinality of what was previously the whole class is automatically set to Exactly one (1).

Right-click on the association you want to convert to open its Association menu and select the Convert to composition option. The role with multiplicity Exactly one (1) will be that of class whole and will appear as a black rhombus. The direction of navigability will be automatically corrected so that it points to the class part.

For the command to be available, at least one role of the association must have multiplicity Exactly one (1).

In the model in figure we have represented the customers (Customer) of a digital store and the payment methods they use (Payment_method). We have modeled the relationship between the two classes through a composition: since the presence in the system of data related to credit cards is dependent on the single record of the customer, Customer is the whole class, while Payment_method is the part class; it would not make sense to manage the payment methods independently, keeping track of the cards that belong to customers who no longer use the application (and therefore have been deleted from the database).

Since each customer may have use multiple payment methods, we set Any (*) as the multiplicity for the role of the part class.

Let’s now expand the previous example by modeling the customers’ home address, another concept that is heavily dependent on Customer. Unlike payment methods, which could be more than one for each customer, each object in Customer can only correspond to one address. For this reason, we have chosen as multiplicity Zero or one (01); compared to a more stringent multiplicity like Exactly one (1), Zero or one allows to add the address also later (but still from the form of Customer). 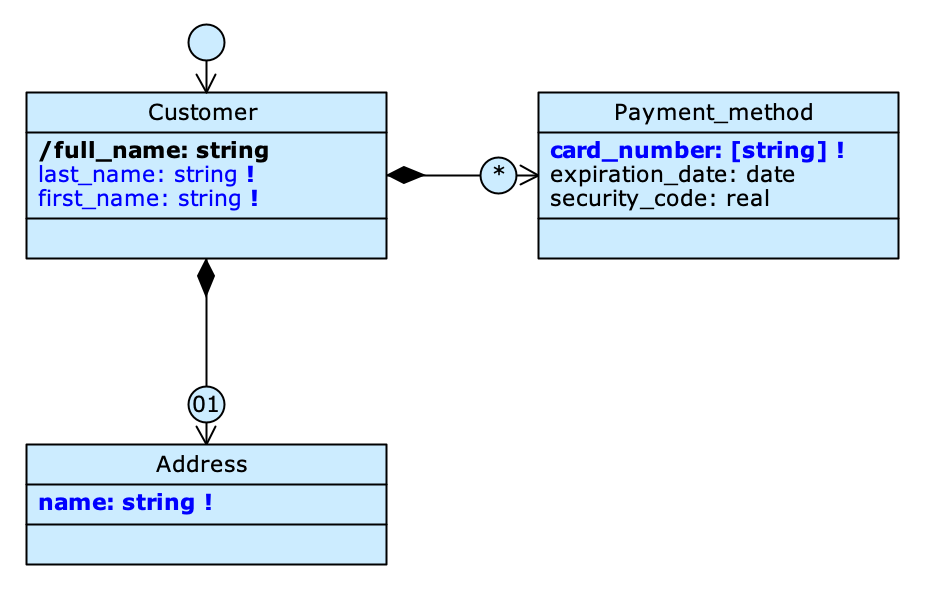 We then added the Employee class to the model, to create a registry of the employees in our application. Instead of modeling a separate class to store their addresses, we preferred to reuse the existing Address class. We thus created another composition with multiplicity Zero or one (01), which connects Employee to Address. 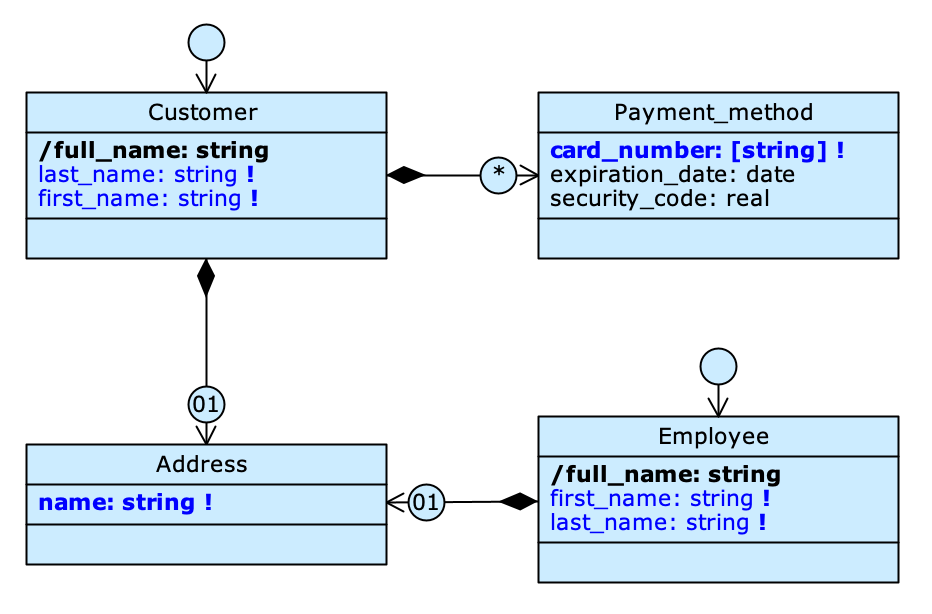 In the case of multiple compositions like this, the Designer allows us to define a specific uniqueness constraint (Unique constraint options for parts), based on the origin of the part object. This way we can prevent the information of one class from conflicting with that of another.