In almost all real-world modeling scenarios there are links between different classes of objects. It is in fact common that distinct information, that is represented on more tables, can be correlated between them. These connections happen through the relations, represented in the model from lines that connect pairs of classes.

In the following example we have modeled two distinguished classes: one for the employees (Employee) and one for their work team (Team). If we want to represent an employee’s membership in a team, we can connect these two classes with a relationship. This allows us to match the objects of one class to the objects of the other: the choice of the employee’s team will therefore be made by selecting one of the objects present in the Team class.

How do the relationships of a model get translated at the database level?

For more information about mapping classes and their relationships to physical tables in the Cloudlet database, you can consult this document.

Each of the classes that participate in a relation assumes a role, which clarifies the meaning of the relation itself. In the model, roles are depicted with circles placed at the ends of the relationship.

When a role is selected in the diagram, the class to which the role belongs is also highlighted. This class is called parent for that role (in some cases it is also called source class), while the class represented by that role is called target. It can be useful to imagine a role as a special attribute of the parent class, whose value is an object (or set of objects) of the target class (Employee.team_ has an object of Team as its value).

Roles are only present at the navigable ends of a relationship.

Creating a role depends on the type of relationship you want to model. For more information, see the Associations and Compositions pages.

Select the role you want to rename and right click to open its Role menu. From the drop-down menu choose Rename or press F2.

Alternatively, double-click on the role you want to rename. 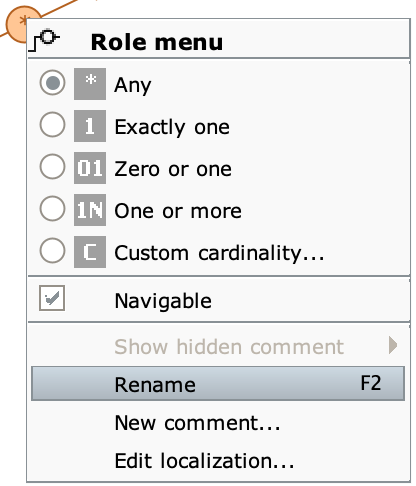 The role names of the relation chosen by default by the Designer are employee_ and city_ respectively. To make the latter more explanatory, we renamed it city_of_residence_.

Next, we wanted to represent the employees’ city of birth as well. Reusing the same classes, we created a second relation, renaming the role with City as its target as city_of_birth.

The multiplicity of a role determines the number of objects of a target class that you can associate with the source class. In the Designer it is represented by the number or character written inside the role. By hovering the mouse over a role, a tooltip appears, explaining the meaning of its multiplicity.

These are the available multiplicities:

Looking at the example shown in the figure, we can see that the two roles of the relationship between Employee and Team have different multiplicities. Let’s look at their significance:

Setting a minimum multiplicity other than 0 introduces a de facto integrity constraint on the role: this makes it mandatory to associate at least one object of the class to which the relationship points. In most cases it may not be desirable to use very stringent multiplicities, such as Exactly one or One or more, because they may introduce alignment problems between the model and the database.

Select the role whose multiplicity you want to edit and right-click to open its Role menu. From the drop-down menu choose the desired multiplicity. 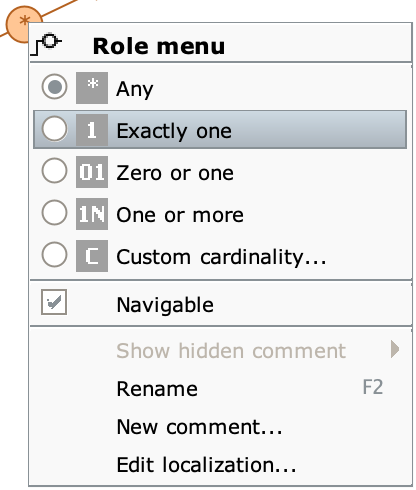 Depending on the type of relationship and the classes involved, it is not always possible to freely change the multiplicity of a role; some options in the Role menu may not be available. For more information, see the pages dedicated to special classes, associations and compositions.

Choosing Custom cardinality... opens the Cardinality Editor, from where you can customize values for minimum and maximum multiplicity. 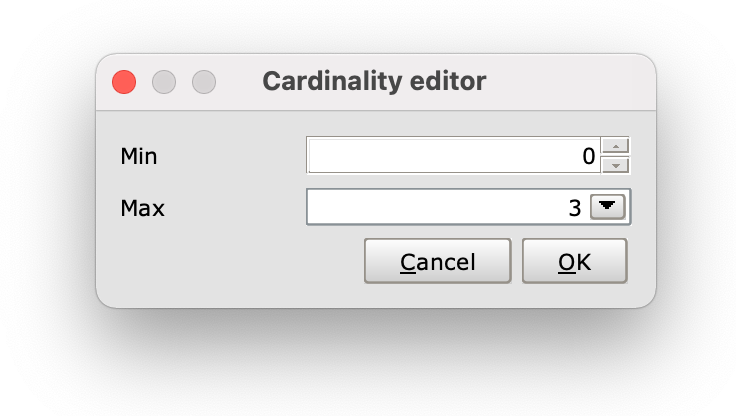 In the example, we imposed a limit of 3 qualifications per employee. We have therefore inserted a custom multiplicity (C) for the role pointing to Qualification. 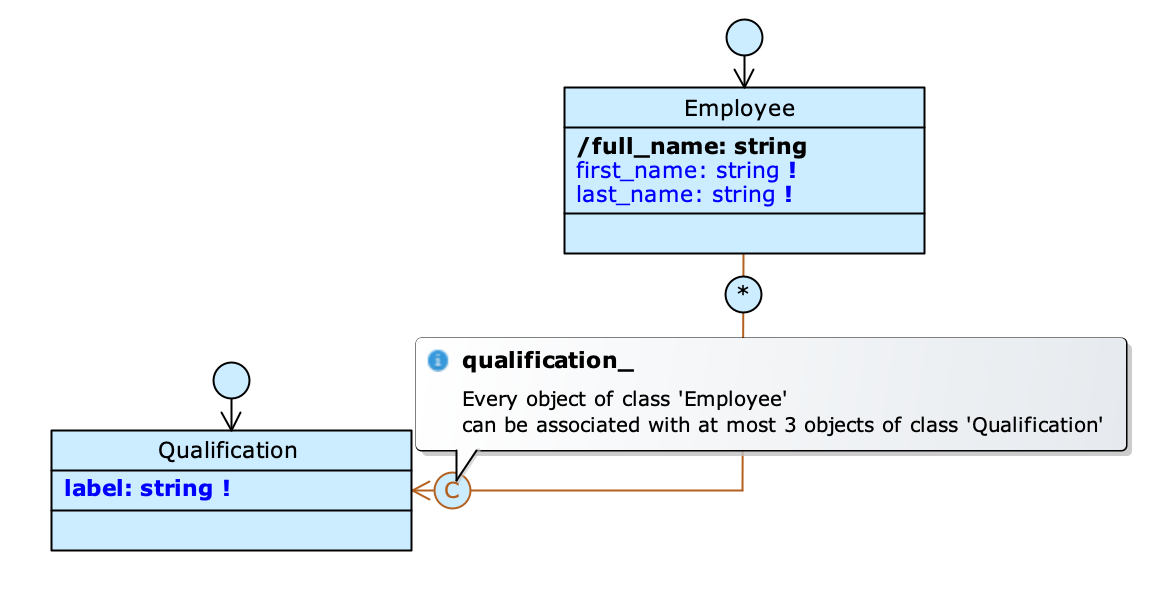 Since Livebase only supports binary relationships (involving two classes), navigability can only be of two types, unidirectional or bidirectional. Each relation must be navigable in at least one direction.

Select the role pointing in the direction you want to change navigability and right click to open its Role menu. From the drop-down menu, check the Navigable option to make the association navigable in that direction.

To do the opposite, remove the checkmark to make the association navigable in the opposite direction only. 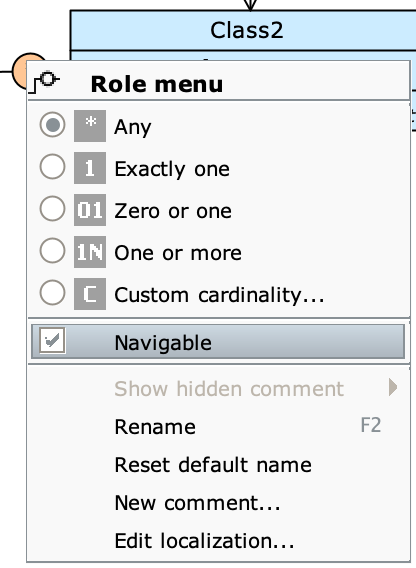