The topic of this page is closely related to that of Selection filters. If you haven’t already read it, we recommend that you first read the section on filters on role associables.

Given an association between a source class A and a destination class B, a Selection path defined on the role to B is an alternative path between the same pair of classes that, given an object of class A, identifies all and only the objects of class B with which it can be associated.

Opening the Custom path selector from the Role menu of the role on which you want to define the Selection path, the Designer shows a number of alternative paths; selecting one, the relationships crossed are highlighted in red. Each step of the path corresponds to the crossing of a relation, and therefore finds a set of objects (the already associated instances of the class towards which the relation points). The set of associated objects are all the instances that can be reached by crossing the path defined in the Selection path.

In the picture are shown the first two Selection path proposed by the Designer for the association role that from Employee enters in Project.

The name of the paths consists of the starting class, followed by all the roles crossed (separated by dots) and the name of the ending class.

Taking the example shown in the figure, the first path starts in Employee, traverses the roles city_, branch_, and project_, and ends in the class Project; the name of this Selection path is therefore Employee.city_.branch_.project_.Project.

It is not allowed to define Selection path on the roles of a composition (just as it is not possible to define filters on them): a part object cannot exist without its whole; consequently, it makes no sense to define a set of part that can be associated with a whole because the set of non-associables is an empty set.

From the Application Schema , right click on a role to open its Role menu; select Set selection path... to open the Custom path selector and define the selection path. 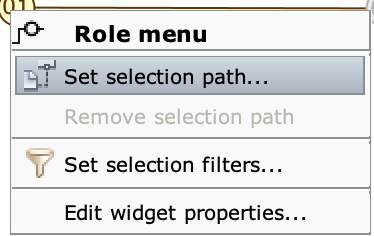 A limited number of paths are shown in the Custom path selector. If the desired path does not appear among those shown, you can define it manually by clicking on the Define manually...; this command opens a Query path editor, from which you can specify each step of the path in a manner similar to defining a query, without being able to apply filtering conditions and aggregation functions. 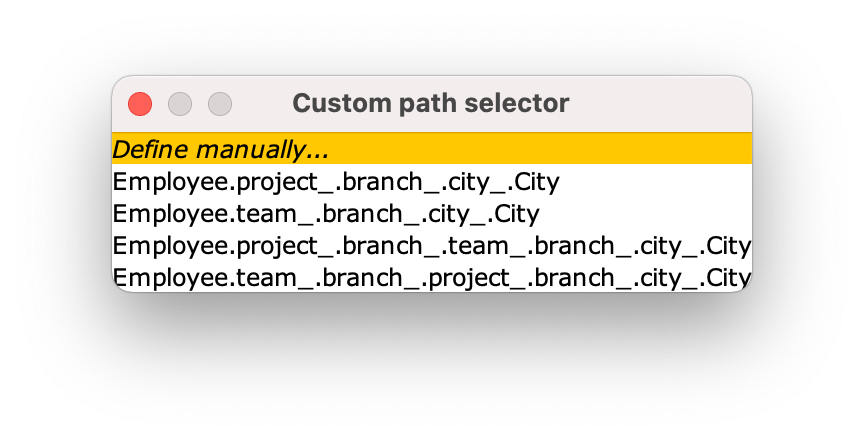 Since the set of assignable objects is determined by the objects found by following relations other than the one on which the role is to be filtered, the Selection path is available only when there are more than one path connecting the classes pointed to by the association role. In the absence of alternative selection paths, the Designer warns the user with the message No valid path has been found for the selected element.

To remove a Selection path, right-click on the role on which it was defined to open its Role menu, and select the Remove selection path option.

We have modeled an informative system in a position to managing a registry of the employees (Employee) and to trace, for every employee, the center in which it works and the computer that it uses. The system also stores the offices present in each operational location and the distribution of computers in the various offices.

In order to prevent the possibility of assigning to an employee a computer that is not present in the office where he works, we defined a Selection path on the role towards Computer of the association between Employee and Computer (because the assignment of computers to employees is done by the creation/modification mask of the Empoyee class).

We then selected the Set selection path option from the Role menu of computer_: in the following image the Designer shows in red the only alternative path identified by the Custom path selector: 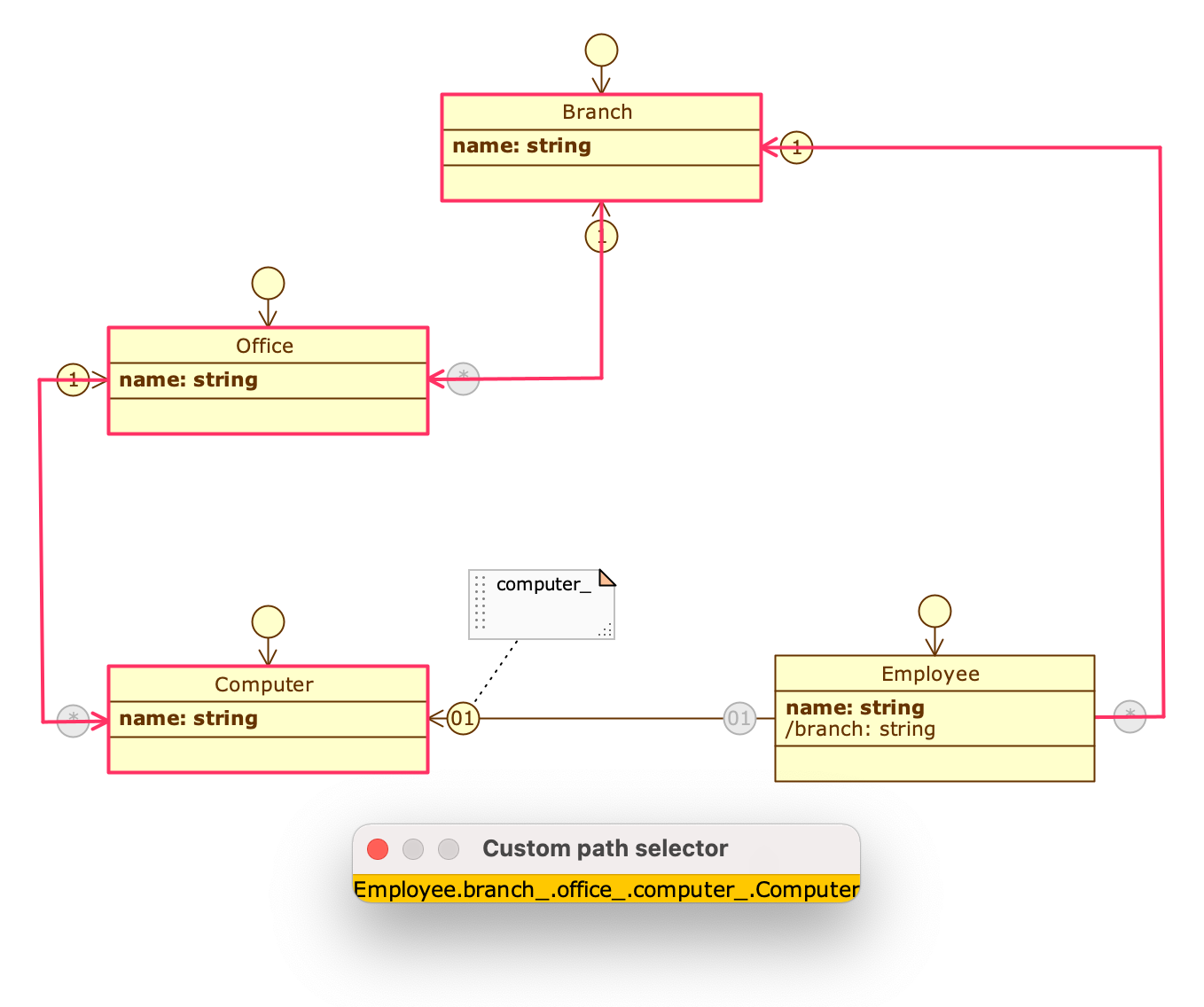 The selected Selection path (Employee.branch_.office_.computer) locates the computers that can be associated with a generic employee with the following algorithm that consists of several steps, one for each relationship crossed by the path:

Given an employee, we can visualize in the following extensional diagram the relationships traversed by the Selection path and the objects found at each step. 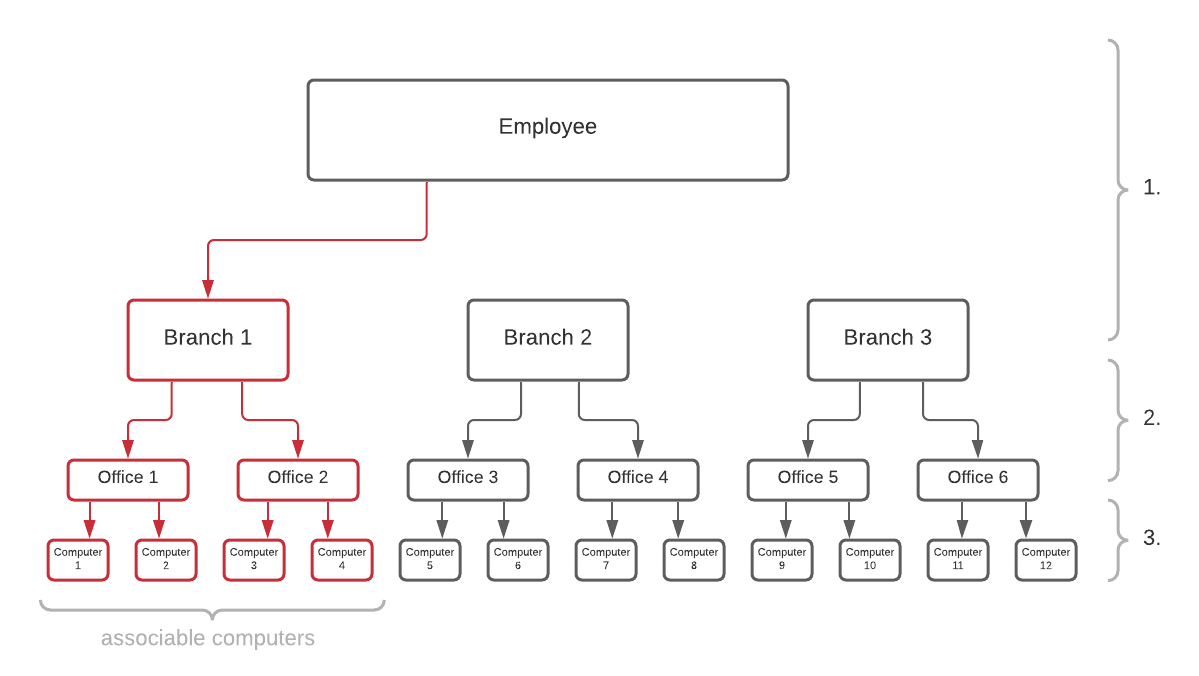