Each attribute is characterized by an identifier and a data type.

The identifier must have a unique name within the class and cannot have spaces: the Designer automatically replaces the typing of each space with the _ character. 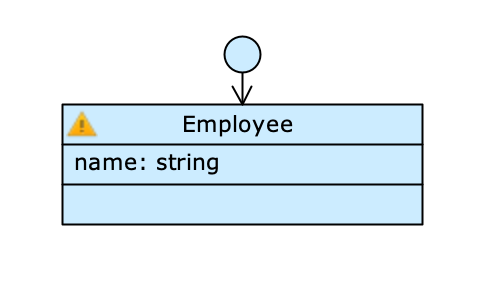 Within the Employee class shown in the figure there is only one attribute: name is the identifier and string is the data type. The warning appears because no Object title has been yet defined.

The data type determines what kind of information is stored through the attribute. The following data types are supported:

The following attribute types are supported:

The Object title is the name by which the object of a class being examined in the application is identified; this name is represented by the value of a single attribute.

For more information on the concept of Object Title, see the dedicated paragraph in the “What is a class?” section.

Set an attribute as Object title #

Select the attribute and right click to open the Attribute menu; from the drop down menu check the Object title option. 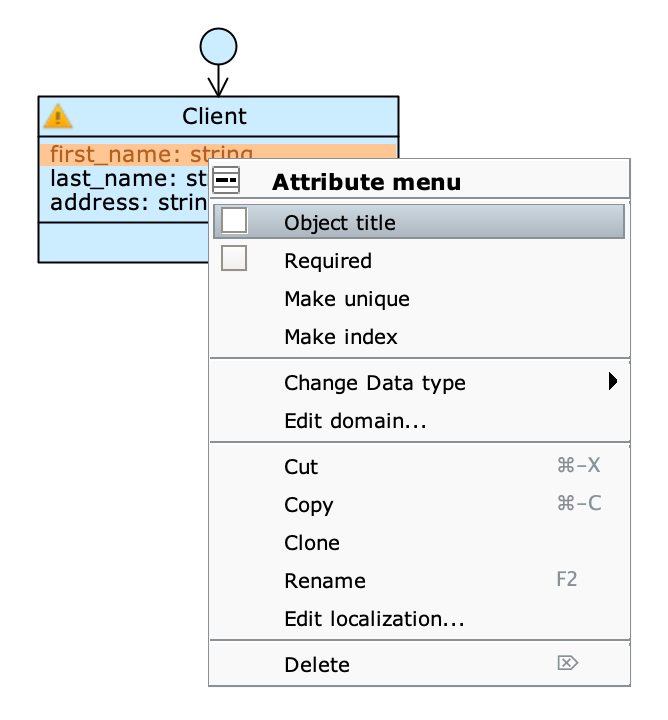 It is possible to set as Object title a derived attribute of type math that corresponds to the concatenation of several attributes. This concatenation is a string defined in the Math expression editor by means of an expression, which by default is concat(s1," ",s2,...), where s1 and s2 are the names of the attributes involved and " " indicates a space separating them. The name of the object shown in the application is thus calculated by concatenating the values ​​of all the attributes that make up the Object title. 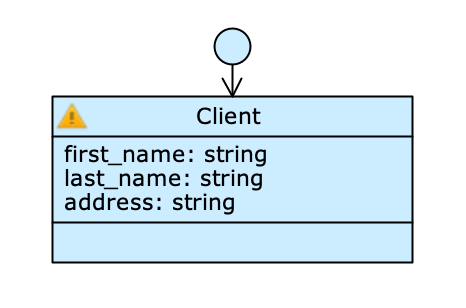 Let’s take for example the Client class shown in the figure; there are three attributes in the list: the first name (first_name), the last name (last_name) and the address (address). If you want to set the full name of the customers as the name of the class object, you can define as Object title a derivative that computes the concatenation of the attributes first_name and last_name (thus not including address).

Hold down the Ctrl key and select at the same time the attributes that should be part of the Object title; click on one of them to open the Attribute menu and select Create object title. Check the expression that is shown in the Math expression editor: if the expression is valid, Expression validated as STRING appears in the panel. By clicking Ok a new attribute, /title, is added to the list. Then you can rename the created Object title as any other attribute. 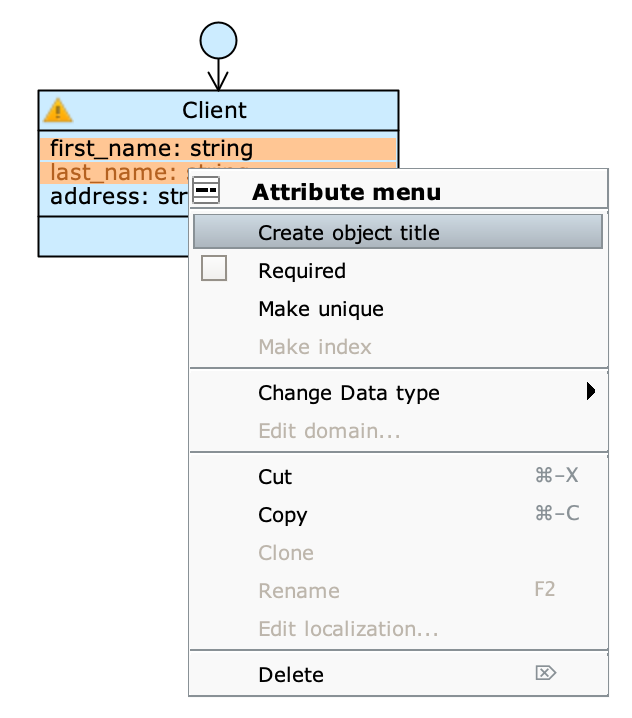 The resulting output expression in the editor will then be concat(first_name," ",last_name). 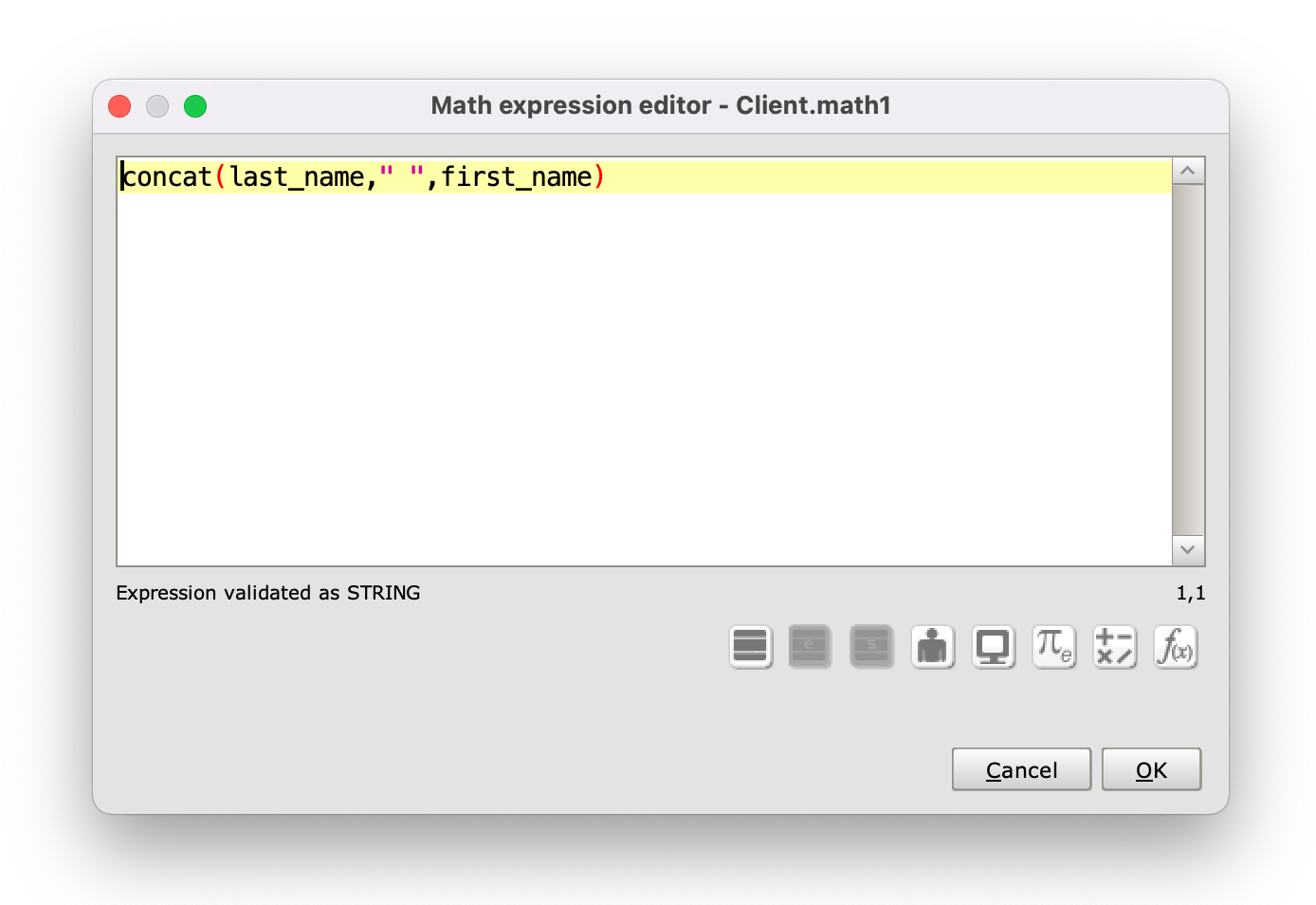 By default an Object title defined over multiple attributes has the name /title. Once created, you can rename /title to /full_name. 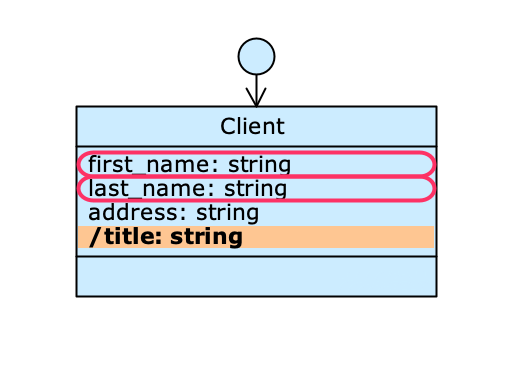