In the attribute list of a class, derived attributes are denoted by the prefix /.

You can edit the expression used in any derived attribute by right-clicking on it and choosing Edit expression from the context menu.

A derived attribute can be calculated only for those records that have values for all attributes used as input by its expression. If even one value is missing, the derived attribute will not be shown. To make sure this doesn’t happen, simply set all necessary attributes to required.

A quick way to do this is to right-click on the derived attribute, open the context menu, choose the Source attributes option, and tick as required all attributes present.

Derived attributes depend on other attributes in the database. Because of this, it is not possible to perform some of the operations normally allowed with native attributes:

A math attribute is an attribute whose value is calculated by a mathematical expression defined through the Math expression editor.

Right-click on a class to open its Class menu and select New derived attribute > Math. The Math expression editor opens and you can write the math expression to calculate the attribute.

The Math expression editor allows you to define expressions, in which you can reference the value of other attributes present in the same class.

The editor calculates in real time the validity of the expression as you type, so don’t worry about error messages until you’ve finished typing it.

The icons in the lower right corner allow you to insert the elements of the expression by choosing them directly from a drop-down menu. Let’s see them in detail:

The Function picker collects a set of utility functions for defining expressions, including ensemble/mathematical functions or operators on dates and strings. Selecting a function from the list shows its description, which includes the required input parameters with the corresponding data types. Click on Show Examples to see examples of how each function is used. 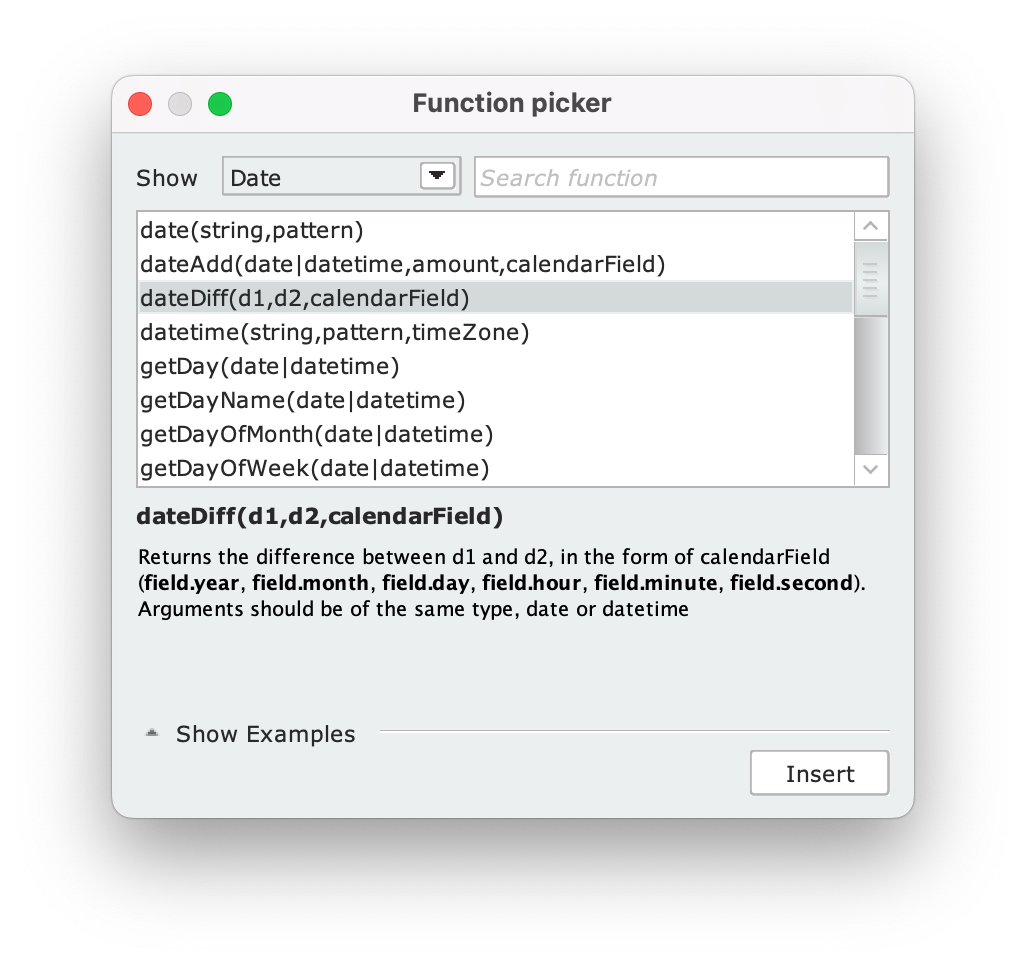 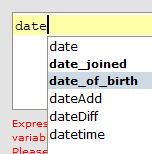 You can quickly insert attributes and functions directly from the text area, thanks to the editor’s autocomplete utility. As you type of an attribute, press Ctrl+Space to open a popup with suggestions of available functions and attributes (shown in bold).

If you place the cursor over a math attribute, a tooltip appears showing the expression that defines it.

In the example shown in the figure, the attribute /age, which determines the age of an employee (Employee), has been selected; to do this, it uses the native attribute date_of_birth to calculate the difference in years between the current date and the employee’s date of birth. Let’s now see in detail how this calculation takes place.

The expression uses the function dateDiff(d1,d2,calendarField), where d2 is the term in the expression that is subtracted from d1:

At the end of the insertion, the message Expression has been validated as INTEGER confirms that the expression used is valid.

Note that also /full_name is a math attribute. This attribute was created by defining an Object title over multiple attributes. More information about this operation is available in the dedicated paragraph.

A query attribute is computed from the value of an attribute present on a class other than the one on which it is defined and connected with a relation or a path of relations to the class of interest. The attribute pointed to by the query is called the target attribute, while the path of relationships traversed is called path.

By selecting a query attribute, the corresponding target attribute is highlighted in red. Conversely, by selecting an attribute involved in a query, all attributes defined from it are circled in blue. This mechanism allows us to know the path taken by the query to reach the attribute.

There can be multiple paths connecting the class on which the query is defined and the class of the target attribute. The reachability of the classes does not depend on the navigability of the roles: it is sufficient that a relationship exists between two classes for it to be navigable in both directions.

Positioning the cursor over a query attribute, a tooltip appears showing the expression that defines it, as shown in the following figure:

In the example, instead of persisting information about an employee’s city of residence (Employee) using a native attribute, we chose to model the cities independently, as objects of class City. To associate an employee with a city, it is therefore possible to use the derived attribute /city, which has as its target the attribute name present in the City class.

Right-click on a class to open its Class menu and select New derived attribute > Query.

Alternatively, select the target attribute, drag and drop it onto the class where you want to create the query and select Link here from the context menu.

You cannot define query attributes on a class with no relations.

The Designer chooses the default name of a query in this way:

The path selected by the query is also given in text form (e.g. city_.name). This string can be edited to manually change the query path.

A query whose path traverses at least one to-many role will retrieve multiple values for the pointed attribute, one for each object of the class involved in the relation; it is therefore necessary to define how to aggregate this set of values to represent them in a single attribute (e.g. concatenating the values, summing them, selecting the maximum value, etc.). Depending on the data type of the pointed attribute, the Aggregation function dropdown presents several options; the table shows all available functions:

If the source is a numeric attribute, additional operators are available:

For Boolean attributes we also have:

When the source attribute has a unique constraint or is unique by definition (such as the \id), the count and concat operators behave the same way as their distinct counterparts.

It is possible to filter the records found by the query in a way similar to what happens in a SQL WHERE clause, by defining a filtering condition (filtering condition) through an expression; this is useful especially when the query retrieves multiple values.

Clicking on the Add filter button of the Query expression editor opens an editor essentially identical to the Math expression editor, with one important difference: the expression of a filtering condition must always return a boolean value (TRUE or FALSE). If the expression is correct, the editor displays the message Expression has been validated as BOOLEAN and allows you to confirm the entry.

When the expression uses only one Boolean attribute directly, the result will simply depend on the value of that attribute; in such cases you can avoid writing <AttributeName> = true and use `

In the following example, we want to determine how many projects (Project) have been completed by an employee (Employee).

The completed attribute on Project represents the status of the project: the value TRUE is equivalent to saying that it has been completed.

The query /completed_projects in the Employee class points to the name attribute of Project. The association has to-many cardinality (an employee can be assigned to multiple projects) so we need to aggregate the data with an operator in order to represent it with a single attribute. From the Query expression editor, the option COUNT_DISTINCT was therefore selected as Aggregation function. In this way the count of all projects assigned to an employee was obtained.

To complete the definition of the query it is necessary to exclude from the count all the projects not yet completed (for which the attribute completed has therefore value FALSE). To do this, we set the condition Project.completed=true.